I wrote in the 3 March 2014 posting that “the provost’s office looks inept when they try to show off”. Although the people in that office are usually superb, they clearly did not heed my warning. The open session of today’s board meeting began with another pair of their dog-and-pony-shows that utterly wasted the board’s time. This began with a presentation (not a discussion) of Carleton’s new so-called leadership program. Katherine Graham kept emphasizing how the primary purpose of this program was to break down silos, especially between administration, faculty, and staff (okay, she also emphasized how the program would make Carleton more ‘leaderful’, whatever that tortured adjective means). However, she and Cindy Taylor also kept emphasizing how the leadership program has three separate streams: one for people who only deal with their home units, another for people who work across more units, and another for people who work with university-wide programs. That sounds like old-fashioned hierarchical silo-building to me. We also heard some great vacuous quotes, such as “the sum is greater than the parts”. This leadership program may be good, but the board certainly had no way of seeing that.

Katherine Graham followed this with a summary of how Carleton was meeting its targets from the strategic plan by handing everyone a copy of what may have been one of the world’s worst graphics. I am attaching it here; see if you can interpret all the chart-junk and utterly extraordinary redundancies. Also note from this graphic that nothing about our strategic plan looks integrated! It is ironic that, a few months ago, the board found it to be too much minutiae getting involved with the lack of vetting of special assistants to the provost, yet one of those special assistants then wasted almost a half-hour of every board members’ time.

The building committee reported in open session that the proposed new residence building has slipped until at least 2017. The building committee then reported that the vice president finance said this was good news because of projected lower demand for such a residence. This goes back to my mantra that Carleton needs to stop erecting so many new buildings when we can pretty much guarantee that enrolments will drop by 8% in the near future. If buildings are falling apart, then by all means replace them, but stop building new capacity.

Speaking of new capacity, the building committee also reported in open session that the proposed new health building is in very preliminary stages of consultation. This was quite a change from the apparent rush that we heard about in open session on 29 April 2014. At that meeting two months ago, the vice president finance promised to get back to the board about how the remaining $12.4 million of a health building would be financed at today’s open session, but today he volunteered no such information.

At the 27 March 2014 board meeting, there was lively discussion about tuition freezes, with it resolved that the students, administration, and board would submit a joint letter to the provincial government on this matter. Action on this is being deferred until September for several reasons, some of which may be specious. First, the recent provincial election. Second, summer is here. Third, the Council of Ontario Universities (COU) is planning on submitting a similar letter on behalf of their members that covers both tuition freezes and increases in the provincial funding formula. The university president offered up the possibility that Carleton could be a signatory to a pair of letters, our own one and the COU letter. This might be especially poignant in light of the new minister of training colleges and universities (MTCU), Reza Moridi, who is also minister of research and innovation (MRI).

If my notes are correct, the university president mentioned the appointment of a new provincial special minister for labour relations and collective bargaining. I could find no record of such a position on the provincial website, including a detailed look at the minister of labour’s website. Please help me read the tea leaves as to the implications of creation of such a portfolio, especially after the debacle of the McGuinty government imposing and/or trying to impose collective agreements on teachers and other public sector workers.

The board appointed five new community members to its ranks today. What is most noteworthy is that the nominating committee apparently opted to not just appoint many more white male colleagues. I do not know how these five new board members self-identify, but suspect that three of the five are women. The board truly needs this increased diversity. Kudos.

This blog has and will continue to express my opinions. However, on this rarest of occasions, I am including content by request. At the supper following the board meeting, the university president stated that she hoped to see me blog about the following token gift, much like Richard Braughtigan wanting to end his book “Trout Fishing in America” with the word ‘mayonnaise’. And so, as a fitting way to end the first successful year of blogging on the Carleton University Board of Governors, I hereby honour President Runte’s request with a photo courtesy of Professor Sue Bertram and the title page of an article from the most recent issue of the Carleton University Magazine (Spring 2014). 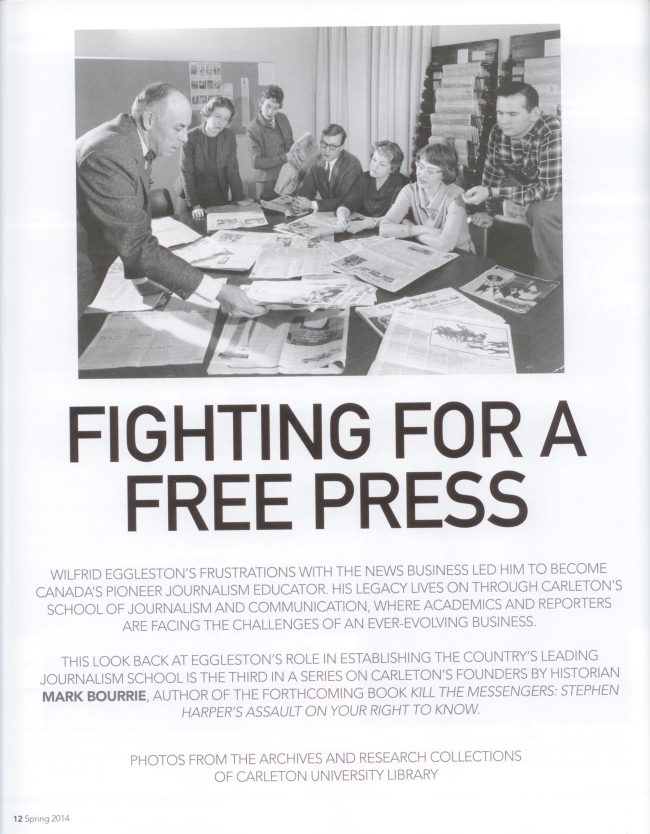